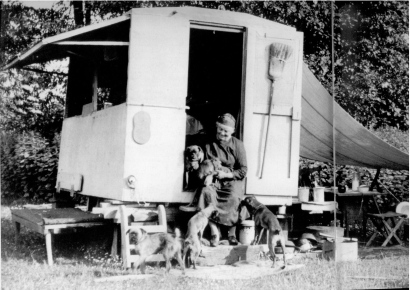 Painter and author, Emily Carr (1871 – 1945) was the honorary eighth member of the Canadian artists known as the ‘Group of Seven’. Her paintings have become the definitive portrait of the Canadian West and a tribute to her studies abroad of the impressionist movement.

Emily and her brother, Richard
Image I-60892 courtesy of Royal BC Museum, BC Archives

As a young woman, Emily braved a solo expedition to a string of remote First Nations settlements of British Columbia. Her on-site illustrations of neglected totem poles disintegrating in decimated villages helped to document a fast disappearing culture. When she was twenty-seven, she was given the native name ‘Klee Wyck, the laughing one’.

Emily became an eccentric icon of her hometown Victoria, on Vancouver Island. She was frequently seen in her later years, a dowdy plump old bird pushing a baby’s pram filled with pottery clay or groceries, accompanied by a tangle of the Griffon dogs she bred, and Woo, a Java monkey that perched on her shoulder, wearing a dress.

Emily eventually became famous for her curmudgeon ways, but she flaunted the rules of society at an early age. Something untoward in her teenage years caused her to reject the intimate loves of her life. One suitor in particular, pursued Emily to the end of her days.

Much local conjecture surrounds the hints of Emily’s lost love in her books as well as her letters and diaries.

Today, an historic mystery man continues to hover over Emily Carr’s memoirs like a ghost.